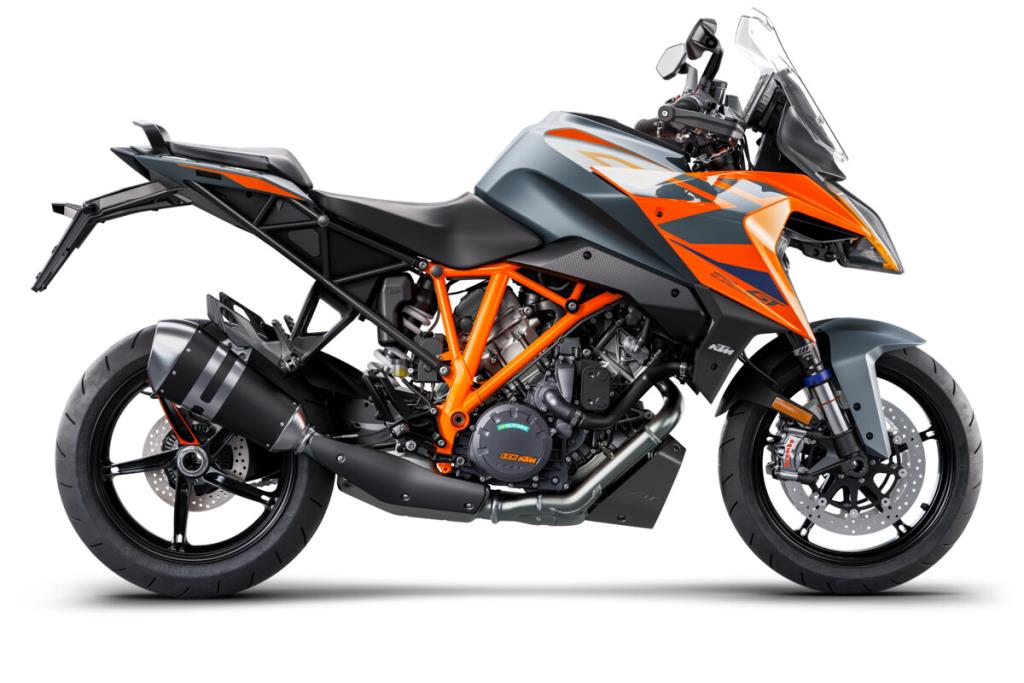 ENGINE
The KTM 1290 SUPER DUKE GT’s BEAST-derived LC8 V-Twin powerplant perfectly fits its sovereign appearance. Now with a EURO5 rating, this 175 hp, 141 Nm lump is as much a superbike slayer as it is a coastal road cruiser. A unique mix of the highest quality components, such as titanium inlet valves, have also combined to create overall reliability and allowing for service intervals of 15,000 km. That’s a lot of touring!

CYLINDER HEAD
An absolutely key element in the outstanding performance and smooth response of the 1301 cc 75° V-twin are the unit’s cutting-edge four-valve cylinder heads. These combine twin-plug ignition, flow-optimized ports, lightweight titanium valves and resonator chambers for the smoothest twin in town.

CRANKSHAFT
The responsiveness and free-revving nature of the KTM 1290 SUPER DUKE GT’s engine is thanks to the low reciprocating weight of its crankshaft.

PISTONS
We borrowed Formula 1 technology in creating the pistons in the KTM 1290 SUPER DUKE GT. The forged piston structure, results in a high loading capacity, despite the extremely short and lightweight design. Furthermore, the piston skirts have a state-of-the-art, hard-anodized finish. Not only does this reduce friction, it is also particularly hard-wearing with a consequently a positive impact on durability.

TWIN IGNITION
The twin-plug ignition system controls two differently sized spark plugs in each cylinder head independently of each other in such a way that more efficient combustion and a smoother, optimally controlled combustion sequence are achieved at all times. The result: more power, better control, lower fuel consumption and lower emissions.

RIDE-BY-WIRE
The ride-by-wire system on the KTM 1290 SUPER DUKE GT goes the extra mile. By electronically translating throttle commands into optimum throttle valve positions for the current riding situation, it processes throttle twist grip movements with the help of electronic sensors and activates the throttle valves accordingly using servo motors. This means smoother throttle response, reducing the chances of low-rev jolting and involuntary wheelies. Voluntary front wheel antics however, could easily be a thing of your future.

MAPPING
When you’re traveling two-up, the last thing you want is a jerky throttle. KTM have worked the EFI mapping, in combination with the plain bearing and timing, to transfer low-down power to the road with less vibration and reduced engine noise.

SLIPPER CLUTCH
Not only does the slipper clutch open when the engine back-torque becomes too high, it also assists when you open up the throttle. The former prevents destabilizing rear wheel chatter when braking sharply or decelerating; the latter reduces the hand force required for changing gear, allowing the clutch to be controlled with one trigger happy finger.

EXHAUST
The KTM 1290 SUPER DUKE GT’s exhaust system is made entirely from rustproof stainless steel and is EURO5 homologated. Hundreds of test bench runs and complex simulations ensured that the exhaust system, which is using an exhaust flap, contributes decisively to the extremely smooth torque curve and excellent emission values of the powerful twin-cylinder. And did we mention the sound? While it whispers at low revs, it will take your breath away reaching for the high notes.

SUBFRAME
Engineered to support a pillion, as well as full-loaded panniers, the subframe on the KTM 1290 SUPER DUKE GT ticks a number of key hyper-touring boxes.

SWINGARM
The single-sided swingarm on the KTM 1290 SUPER DUKE GT is not only the lightest in its class, but also meticulously manufactured and generously dimensioned – a reassuring nod to spirited long distance travel.

SUSPENSION
Innovative WP semi-active suspension serves comfort, safety and adjustability on the KTM 1290 SUPER DUKE GT. This allows the rider to easily adjust suspension settings at the push of a button, with advanced sensor wizardry taking care of the details. Other than the expected “Comfort”, “Street” and “Sport” settings, the rider can also take extra pillion weight into account, with the SCU (Suspension Control Unit) adapting the damping, load and anti-dive rates in real-time. It also monitors rider position, using information provided by a set of stroke sensors and accelerometers to ensure optimal suspension performance in all conditions.

STEERING DAMPER
If you’ve been on the road long enough, you’ll almost definitely come across a rough patch of tarmac. Thanks to a reliable and sensitive WP steering damper fitted as standard to the KTM 1290 SUPER DUKE GT, unpleasant kick-back through the bars is significantly reduced.

TIRES
The KTM 1290 SUPER DUKE GT is equipped with brand new Continental ContiRoadAttack 4 rubber, which have been specifically developed according to KTM requirements. This means the big GT stops, turns, and grips in all road conditions exactly like a Grand Touring motorcycle should.

BRAKES
More than adequate deceleration is ensured at the front wheel by the two radially mounted four-piston Monoblock calipers gripping floating 320 mm discs. The spacing between hand brake lever and handlebar is adjustable so that the lever is always within easy reach for every rider. The front brake receives effective support from the disc brake on the rear wheel, which features a 240 mm diameter disc and a two-piston caliper. The enormous potential of the brakes can be exploited to the full thanks to its sportily tuned anti-lock braking system. The ABS even has a supermoto mode, for when you absolutely feel like backing it in while on holiday.

FUEL TANK
The 23 litre, long range fuel tank, in combination with the low fuel consumption of the 1290 v-twin engine, easily provides hundreds of kilometers of exciting riding without caring about a fuel station; an important benefit for touring in desolate regions. The fuel tank also protects the rider’s lower body from wind and weather for added comfort mile after mile.

DASHBOARD
An all-new full colour 7” TFT Dashboard lifted from the KTM 1290 SUPER ADVENTURE S takes the KTM 1290 SUPER DUKE GT’s dash into a different realm. Featuring a slew of features, from Turn-by-turn navigation to a dedicated PERFORMANCE MODE, the display layout finds the ultimate balance between information, performance, and style.

HANDLEBAR
Arguably the most important component of the KTM 1290 SUPER DUKE GT, the handlebars give the rider complete control, from small steering inputs to adjusting the suspension and ride modes at a push of a button. Even the handlebars themselves are multi-adjustable, with over 22 mm of movement and four positions. But best yet, the KTM 1290 SUPER DUKE GT comes fitted with heated grips as standard.

SWITCHGEAR
All new switchgear means navigating the KTM 1290 SUPER DUKE GT’s impressive TFT functionality is effortless. A great deal of testing and development has gone into the new switch gear on the GT, making it easy for riders to adjust everything from MTC slip settings via the paddles to accessing various menus and widgets.

FOOTPEGS
Riders can choose three positions for the brake and gear shift lever to accommodate a variety of boots sizes, or to simply find their perfect shifting or braking preference.

WINDSHIELD
A unique windshield design gives the rider maximum protection from the elements, and reduced wind noise at speed. An improved windshield adjuster has also been developed, giving riders 9 positions of adjustability, while keeping one hand on the throttle.

BODYWORK
Don’t be fooled – there is a BEAST hiding under all those touring components. Build for comfort, speed, and long-distance travel, the GT is 100% true to its namesake – finished in exclusive GT-only graphics and paint package.

INTEGRATED PANNIER MOUNT
Hard case panniers are offered as KTM PowerParts can be easily fitted to the integrated mounting system of the motorcycle, while keeping the sporty look and unique style of the motorcycle. Remove the panniers in an instant, and instantly be badass.

RIDER AIDS
A slew of advanced electronics are fitted to the KTM 1290 SUPER DUKE GT, which enable the rider to explore the GT’s full potential.

MTC (MOTORCYCLE TRACTION CONTROL)
The MTC (Motorcycle Traction Control) lean-angle sensitive traction control system reacts immediately if the rotational speed of the rear wheel is disproportionate to the riding situation. In a matter of milliseconds, MTC reduces the engine output with an extremely smooth, barely perceptible intervention at the throttle valves, until the system has reduced slippage to optimum proportions for the selected ride mode and current angle of lean. Depending on the selected riding mode, MTC traction control allows different levels of traction slip at the rear wheel. In “Street mode” somewhat more than in “Rain mode”, while slight power slides are allowed when exiting curves in “Sport mode”. All this means that the rider can concentrate on the run of the road and other road users – the guarantee for maximum performance and ultimate riding pleasure, but also a decisive contribution to active safety. For particularly ambitious riders, who feel like enjoying the breathtaking propulsion of the KTM 1290 SUPER DUKE GT without any electronic assistance, the traction control can also be switched off.

MSC (MOTORCYCLE STABILITY CONTROL) WITH C-ABS
The ultimate in safe deceleration. One component of the comprehensive BOSCH MSC assistance package is the lean-angle sensitive cornering ABS. Based on the high-quality 9ME modulator, it unites the talents of combined front and rear wheel braking and lightning-quick, efficient pressure modulation with the high quality BREMBO hardware to make the most advanced braking system on the market – no-one brakes more progressively or safely, even at extreme lean angles.

PERFORMANCE MODE
The optional PERFORMANCE MODE transforms the KTM 1290 SUPER DUKE GT from a beastly tourer to an all-out apex slaying missile by allowing riders to tailor the level of intervention from the traction control and throttle response, turn off anti-wheelie and dial in launch control.

SUPERMOTO MODE
The GT is still part of the DUKE family. With that in mind, we have carried over “Supermoto mode” to allow keen riders to lock the rear wheel with ABS staying active on the front wheel – a prerequisite for committed cornering with the rear wheel screeching in delight.

MOTOR SLIP REGULATION (MSR)
The optionally available MSR (Motor Slip Regulation) works in the opposite direction of the MTC. If, due to quick downshifts or abrupt throttle chopping, the engine drag torque is too high, the  ride by wire opens the throttle exactly as much as is needed to prevent the rear wheel from drifting. Safety first, but pleasure that comes with it is always a very close second at KTM.

HILL HOLD CONTROL (HHC)
The optional HHC (Hill Hold Control) prevents the motorcycle from accidentally rolling backwards. It identifies if the 1290 Super Duke GT is on a slope and at a standstill. After the rider has released the brake, the function automatically keeps the brakes applied until the bike is moving forward. The rider can then start off without rolling backward, ensuring a smooth start.

TPMS
As its name implies, the TPMS monitors tire pressure, and gives you a view of current pressures in the TFT display. In the event of sudden loss of pressure, for example due to tire damage, a warning will alert the rider on the dash.

QUICKSHIFTER+
The optionally available race-derived Quickshifter+ allows for up and down shifts without using the clutch. It reads and responds to your riding, so the shift action is as fast as you are.

CRUISE CONTROL
Long motorway journeys are made even easier with the KTM 1290 SUPER DUKE GT’s standard cruise control. Switches on the left side of the handlebar and a display in the TFT dashboard allow the rider to intuitively set and change the requested speed, so you’ll arrive at the fun bits with energy to spare.

TURN-BY-TURN PLUS
You asked for it – here it is. For the first time in KTM history, the 1290 SUPER DUKE GT will offer improved interaction with navigation directly via the TFT dash. TBT+ will allow riders GPS access while on the fly, allowing up to 10 favorited destinations, keep track of the last 10 set destinations, and even skip a waypoint on your planned route.

ATIR
After 10 seconds of movement and 150 meters of riding distance, the turn signal will stop automatically. If pressed again during longer waits at an intersection, it counts from zero again. A big improvement in terms of safety, as it is now impossible to forget to reset the turn signals.