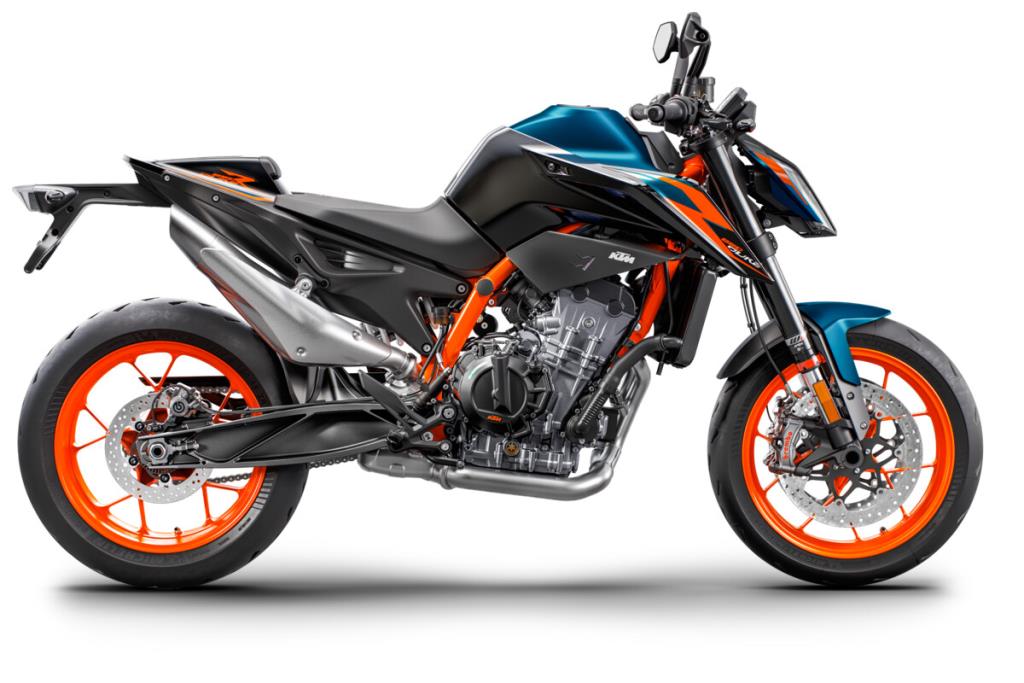 Still agile, but with more punch, the KTM 890 DUKE R takes all the things we love about the KTM 790 DUKE and turns it up to 11. This is a no-compromise mid-weight naked bike, equally at home on mountain roads as it is on the race track, delivering more power, more torque and more dukeness than any parallel twin that has come before.

FRAME
Just like the KTM 790 DUKE, the KTM 890 DUKE R’s handling characteristics are thanks to the dynamic, loadbearing design of the tubular chassis, which allows it to carve through twisty tracks and mountain passes with extreme responsiveness. Just like every other KTM R, the frame is painted orange to highlight its sporty credentials.

SUBFRAME
The subframe is cast aluminum and houses the airbox. No plastic covers, no additional brackets – everything is cast into two connected pieces to reduce complexity and weight. The triangular shapes in the subframe allow for a stronger, stiffer construction.

SWINGARM
The die-cast, open-lattice swingarm is optimized for stiffness but features a steeper angle for increased stability as well as excellent flex characteristics. This makes the KTM 890 DUKE R every bit as sharp as you’d expect it to be.

SUSPENSION
Adapted to suit the added power of the KTM 890 DUKE R but still retaining the signature DUKE agility, the adjustable suspension on the KTM 890 DUKE R has been fettled to be sportier with improved high-speed stability, while retaining real-world street riding comfort.

TRIPLE CLAMPS
Triple clamp stiffness has been tuned to match the flex of the fork, contributing to sporty handling and excellent feedback. An aluminum steering stem has been used instead of steel, as on the KTM 790 DUKE, to reduce the overall weight.

REAR SHOCK
A fully adjustable WP APEX shock takes command at the rear of the bike, with high and low speed compression settings, as well as rebound adjustment. A hydraulically adjustable preload adjuster allows for quick and easy tuning on the fly.

WHEELS
The KTM 890 DUKE R comes with extremely lightweight, light-alloy wheels finished in signature ‘R’ orange as standard. This not only drops the overall weight of the bike, but also minimizes the unsprung masses and aids in faster turn-in and reduced rolling resistance.

TIRES
Getting the KTM 890 DUKE R to really stick to the tarmac is a set of MICHELIN Powercup II hypersport tires. These are state-of-the-art in terms of tire development, offering fantastic grip on track or on the street in all conditions.

BRAKES
Developed with high performance street and track riding in mind, the KTM 890 DUKE R is fitted with the best brakes in the business. Brembo Stylema monoblock calipers and lighter 320 mm floating disks upfront ensure sharp and precise brake feel, while slowing down from speed. These are further enhanced by a Brembo MCS master cylinder, which allows the rider to adjust the lever ratio and brake feel. Overall, 1.2 kg of unsprung mass has been saved compared to the KTM 790 DUKE.

ENGINE
Developed from the same parallel twin that powers the KTM 790 DUKE, the KTM 890 DUKE R engine has been worked into a fire-breathing, high-performance midweight titan. With its increased bore and stroke, higher compression and higher max. RPM limit, the KTM 890 DUKE R churns out an impressive 121 HP and 99 Nm.

CYLINDER HEADS
A new cylinder head has been developed specifically for the KTM 890 DUKE R to accommodate a set of larger 37 mm intake and 30 mm exhaust valves, while the camshafts feature increased lift and a more aggressive profile. A new balancer shaft has also been added to match the increased RPM and increased rotating mass.

PASC CLUTCH
The slipper clutch allows riders to enter corners confidently without locking up the rear wheel under hard deceleration or when downshifting, while remaining feather-light on the clutch finger.

RIDE-BY-WIRE
Ride-by-wire processes throttle inputs with the help of electronic sensors and activates the throttle valves, electronically translating the throttle commands of the rider into the best throttle valve positions for the current riding situation. All this means more control when attacking the twisties.

CRANKCASE
The KTM 890 DUKE R features horizontally split crankcases, made from high-pressure cast aluminum, allowing for thinner wall thickness and added weight saving. The crankcases on the KTM 890 DUKE R have also been re-engineered to allow for the longer stroke over the KTM 790 DUKE.

PISTONS
Two forged box pistons featuring three piston rings and a bronze conrod bearing work in tandem to power the beating heart of the KTM 890 DUKE R. Thanks to the box construction, piston weight is reduced by 10 grams compared to the pistons in the KTM 790 DUKE engine, despite the larger bore.

EXHAUST
A stainless-steel thing of beauty. The middle damper centralizes mass and allows for a relatively small muffler that plays a dramatic soundtrack. Hundreds of test bench runs and complex simulations ensured that this exhaust system contributes decisively to the tractable torque curve and excellent emission standards.

LED HEADLIGHT
The LED headlights on the KTM 890 DUKE R combine optimal near-field illumination with maximum light output. Daytime running lights ensure that other road users see you coming, which you undoubtedly will be doing at speed.

TFT DISPLAY
A multicolor combination of relevant information, presented in an uncluttered way. As you rev the engine, the display bars change color, either spurring you on or warning you that the engine’s still cold. The display also automatically adapts its illumination to the ambient light. On the KTM 890 DUKE R, anti-wheelie and ABS modes are shown in the display.

RIDER AIDS
For KTM, electronic rider aids are a way to provide more control, performance and fun. Riders can choose from four ride modes, namely: Sport for more aggressive riding, Street for comfortable urban riding, Rain for when things get a little slippery, and the ultimate attack mode – Track.

RIDE MODES
For KTM, electronic rider aids are a way to provide more control, performance and fun. Riders can choose from four ride modes;
Rain Mode – As the name suggests, “Rain mode” is the default safety mode for slippery riding conditions offering maximum traction control, smooth throttle response and reduced power.
Street Mode – The mode for daily riding gives you full power, default throttle control and sufficient traction control suitable for street riding without sacrificing acceleration by cutting power when the front wheel lifts off the deck.
Sport Mode – The mode for sporty street riding offers full power, snappier throttle response and less intrusive traction control, which allows some wheelspin. This mode also allows the front wheel to leave the ground without any interference from the traction control, allowing maximum acceleration.
Track Mode – The 890 DUKE R’s optional Track mode allows a certain level of customization for riders wanting to choose their own preferences when it comes to throttle control, 9 levels of traction control slip and the ability to switch anti-wheelie mode on or off. MSR is switched off in track mode to allow more control.

MTC
Motorcycle Traction Control (MTC) is a mouthful, but it’s an important part of the KTM 890 DUKE R. MTC is a lean-angle sensitive traction control system, which reduces engine output with an extremely smooth, barely noticeable intervention to limit wheelslip. Depending on the selected ride mode, MTC also allows for several levels of traction control at the rear wheel.

QUICKSHIFTER+ (OPTIONAL)
The KTM 890 DUKE R allows for slick, clutchless up and downshifts thanks to the optional Quickshifter+ system. It reads and responds to your riding under any load to ensure shift action is as fast as you are. When downshifting, the system matches the engine speed to the speed of the lower gear.

SUPERMOTO ABS
Supermoto ABS allows enthusiastic and experienced riders to lock up the rear wheel – a prerequisite for committed Supermoto riding and deliberately executed slides. This means ABS is deactivated on the rear wheel, while maintaining ABS function on the front.

BODYWORK
The KTM 890 DUKE R casts an intimidating shadow thanks to its menacing profile and ultrasharp lines. In the metal, however, it’s obvious that this DUKE means business. Compact proportions, loud graphics and a bright orange frame are all unapologetically KTM R.

GRAPHICS
A high-quality application process has been used to ensure the signature ‘R’ graphics on the KTM 890 DUKE R demand respect. Contrasting orange on white sets it apart from anything else in the mid-weight title fight. 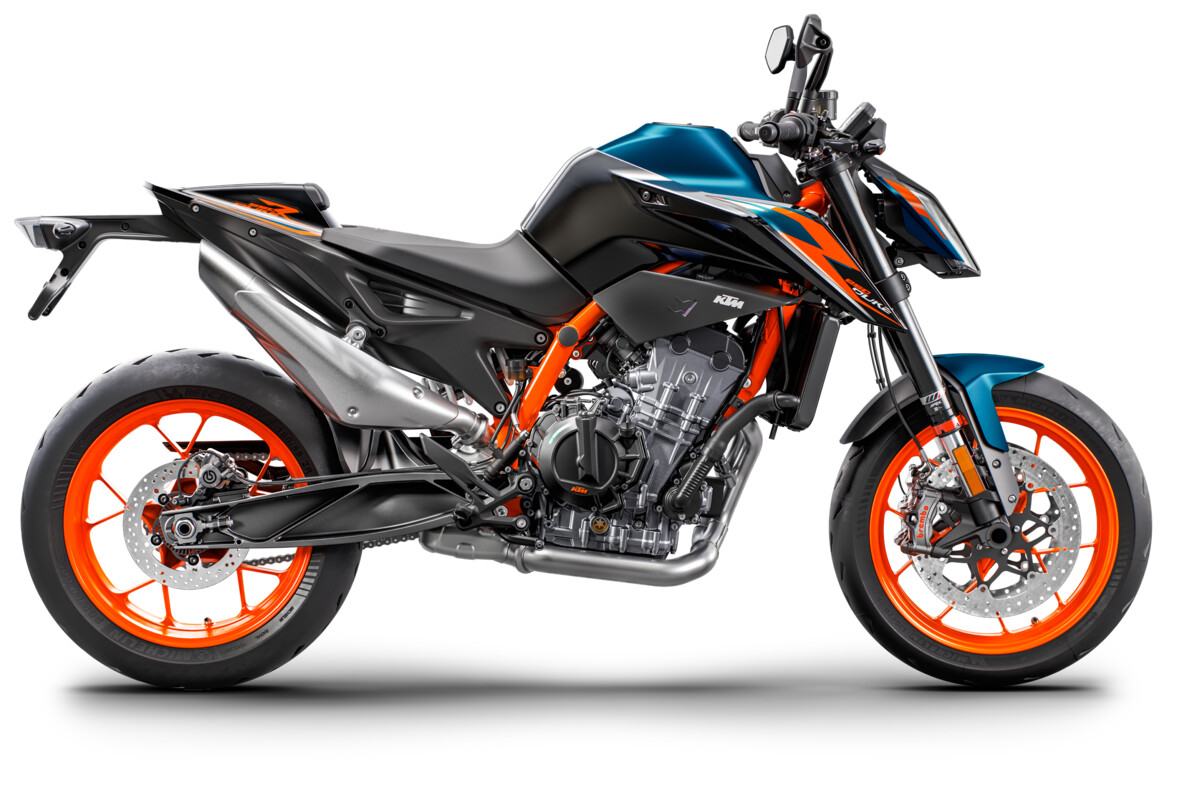